Tea by the Sea - A Meeting of Three Species

Tea by the Sea - A Meeting of Three Species

From the first time we shared tea with Harold at the Center until now, we've been exchanging tea music. One of our first conversations was about the melding of a great album with a session of fine tea. He has a great ear and a beautiful soul, which of course results in wonderful taste in music. This album he's produced is on a long list of rewarding work Harold has contributed to in order to better our planet. Tea is inspiring brothers and sisters to good works around the globe.

It was never my intention to make an album. I'm not a musician, nor have I ever worked in the music industry. I am an environmental activist and educator by profession, specializing in creating a variety of media to foster awe and wonder toward the natural world.

But then I spent a Christmas in Wisconsin, and this all changed. It was a cold night and I was sitting in the dark around a kitchen table with Jessica Gardiner, my soonto-be fellow producer. Christmas music played in the background. I felt sad...

They were the same Christmas songs I'd been hearing for months - at every gas station, escalator, doctor's office, grocery store and public bathroom. I lamented how a holiday that had once been considered sacred had become so excessively commercial, with plastic Santa Clauses as its emblem. Then, a curious question arose in my mind:

Would it be possible to create a new kind of sacred music for the winter holidays?

An image of whales appeared in my mind's eye. I began hearing their otherworldly intoning inside my head.

And then I realized how whalesong had not been appropriated by consumer culture. Also, through their impenetrable melodies, the whales conveyed a sense of awe and mystery that I found so lacking around the holidays. Thus the idea of Pod Tune was born: an album of whales singing Christmas carols!

After a year of extensive research and experimentation with digital music-finessing technologies, it became clear that whales would never be able to actually "sing" Christmas carols. Still, the idea of whales taking part in a new paradigm of uplifting, inspired music remained with me.

We forged on, exploring other possible music genres that might work. Eventually, ambient arose as the optimal choice. Ambient music so often contains otherworldly resonances. It also has a soundtrack quality - emotionally moving, yet never demanding your full attention. Also, ambient music, by design, acts as an accompaniment to a larger unfolding narrative (in our case, our listeners' lives). Ambient music is even undergoing a kind of renaissance nowadays.

Most importantly, ambient music can facilitate sacred experiences (without reverting to such new-age-y themes as the soundtracks to 2001: A Space Odyssey and Tree of Life). Ambient's potential for deeply spiritual, mediabased experiences seemed perfect for our project.

So we began researching and reaching out to the world's great ambient musicians. We asked them if they might be willing to compose an original track using whale vocalizations as voices and/or instruments. Nearly all responded positively. We were even lucky enough to enroll prominent musicians from both Taiwan and Mainland China to participate, which was nice as it brought another voice from the homeland of Tea to the project.

Humans, humpback whales and, of course, Tea - all participating in one conversation. In doing so, our three species might have collectively created one of the world's great ambient tea albums!

Next, we sought out the leading whale institutions and researchers across the globe. We asked for access to their catalog of recorded whalesong (during the process, we decided to donate all net proceeds to organizations helping whales and oceans). Once again, all agreed to help us.

Eventually, we created a crowdfunding campaign to provide enough funds to provide minimal stipends for the musicians and to pay for all production costs.

As the process unfolded, we noticed that our whale album - like whale migrations - had a pace all its own. Great patience was required, over three years' worth in the end. Two other producers joined us in the evolution: Rob Ganger (another Global Tea Hut member and tea lover) and later, Dr. Jenney Hall.

As the completed tracks started to trickle in and we began arranging them in order for the album, I noticed a peculiar feeling taking hold of me. I was being affected by a new, as-of-yet unnamed type of music - clearly related to ambient, but a new sub-genre I had never heard of before.

It was during the making of Pod Tune that I was serendipitously introduced to living, wild, mystical tea ceremonies by Wu De, Qing Yu (Colin Hudon), Jared Krause and Tian Wu (Baelyn Elspeth). I even had the opportunity to visit the Center in Taiwan while the production of the whale album was unfolding. I attended workshops and retreats, accepted invitations to numerous tea sessions and began my own daily practice of tea. I eventually converted my studio apartment into a tea hut!

And, as I played the whale/ human music album during my own tea sessions, it occurred to me that the experience was in fact about three species coming together to create something wondrous:

Humans, humpback whales and Tea - all participating in one conversation. In doing so, our three species might have collectively created one of the world's great "Ambient Tea" albums! 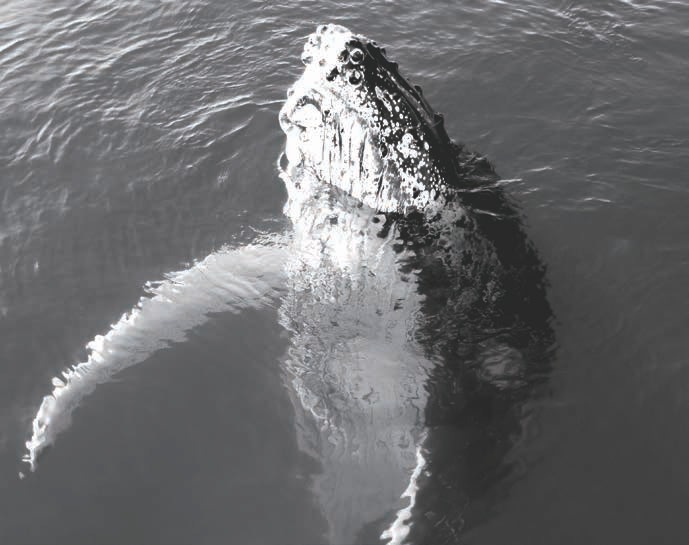