A traditional incense ceremony is calming, centering the one preparing the incense and the guests. It is performed with the same heart-centered mindfulness as a tea ceremony. Like tea, it also utilizes our senses to awaken the spirit and calm the mind; and also like tea, it restores a feeling of connection with Nature. In this article, we'll take a photographic journey through an incense ceremony that will hopefully make you feel like you were there, at least until you can come visit us at the Center! 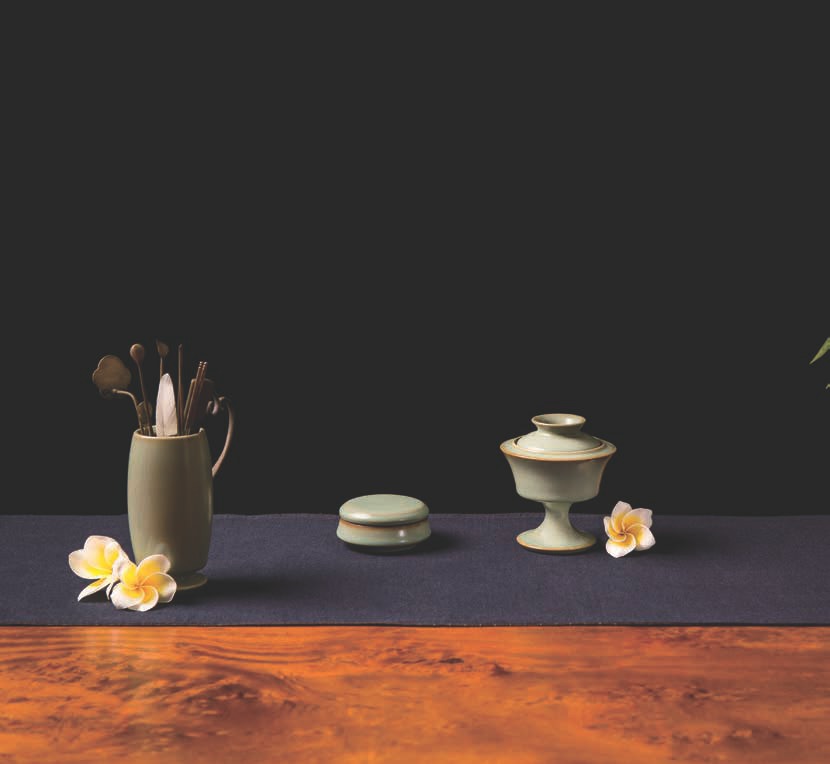 Far Eastern people have been conducting incense ceremonies since at least the Tang Dynasty (618 - 907 C.E.). In the courts of China and Japan, nobles would smell various kinds of incense in spiritual, austere settings as well as more jovial gatherings, often incorporating games based on guessing which kind of incense was being burned or composing poems about the various fragrances. These ceremonies were akin to tea ceremonies, in that they demanded presence, attention to detail, focus on the senses and alluded to Daoist and Zen ideals.

In Japan, the incense ceremony is called the Way of Incense (Kodo, 香道). The incense ceremony, like other arts including tea ceremony (chanoyu), became a way to share the Zen-mind. According to Japanese myths, Aloeswood was first discovered in Japan when a log of it drifted ashore from Vietnam. The sacred log was quickly brought to court and offered to the emperor. Later, the Way of Incense was used by Zen monks, alone and to greet lay guests. It also became popular amongst courtiers and the samurai, who sometimes would have an incense ceremony and/ or tea before facing death in battle. In the 16th century, a beautiful poem listing the benefits of the incense ceremony was popularized (Far-Eastern poetry is replete with lists), though the author remains anonymous.

We often incorporate traditional incense ceremony into our weekly whisked tea ceremonies (chanoyu) here at the Center. We find that the same focus, mindfulness and sacred energy are present in an incense ceremony as are for tea. The Aloeswood calms the mind and purifies the body and spirit, preparing you for the tea that follows. Also, the incense ceremony becomes an offering to Tea herself, to the occasion and to our higher selves (Buddha). They are both based on a return to our hearts and a mindfulness through discipline.

While the traditional Japanese and Chinese incense ceremonies included many kinds of fragrant woods, like sandalwood and others, we almost always use Aloeswood as it has such a positive relationship to Tea.

We thought it would be worthwhile to introduce the utensils and steps in a traditional incense ceremony, should you like to conduct one before your tea. Of course, there are many different ways to enjoy incense. You can burn a stick or coil (like this month's gift), or lay powdered incense in a trail within a censer. Here, we will demonstrate the more traditional way. Roasting the Aloeswood itself will always produce the best fragrance. Burning destroys the oils too quickly and diminishes many of the more subtle notes in fine Aloeswood. By roasting with charcoal, one slowly evaporates the oils from the wood, releasing the fragrance slowly and with a much more full-bodied aroma. Afterwards, we will also show you how to make a patterned "stamp" of powder.

Like tea, an incense ceremony awakens all the senses, filling us with the world. When our senses meet something beyond just pleasure - something that fulfills and harmonizes them - there is always the potential for transcendence if we let go. If we constrict, on the other hand, we may step back and enjoy the pleasure, creating attachment. We should be as the incense: formless and full. Using photography and some descriptions we hope to not only share how a traditional incense ceremony is performed, but also inspire you to the same transcendence open to the guests at such a ceremony. Maybe these pages will have a fragrance all their own.

Let's start with an exploration of all the utensils used in a traditional incense ceremony, before moving on to the steps themselves. 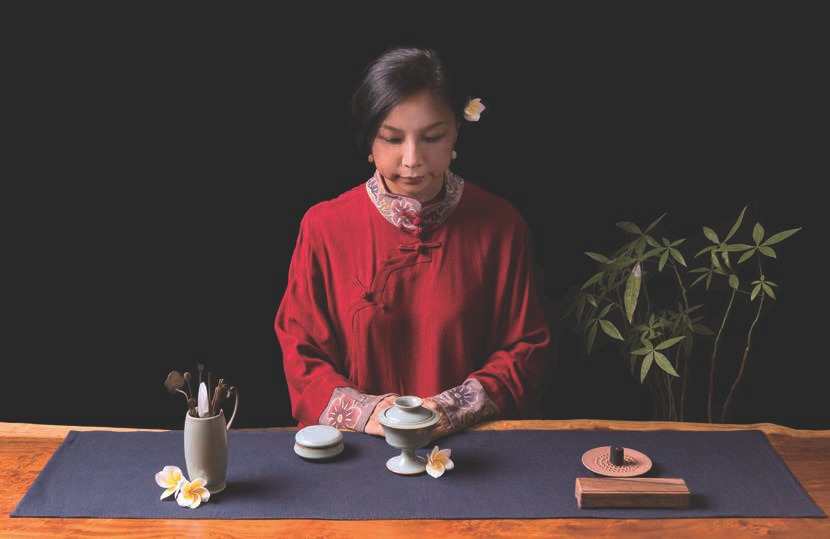 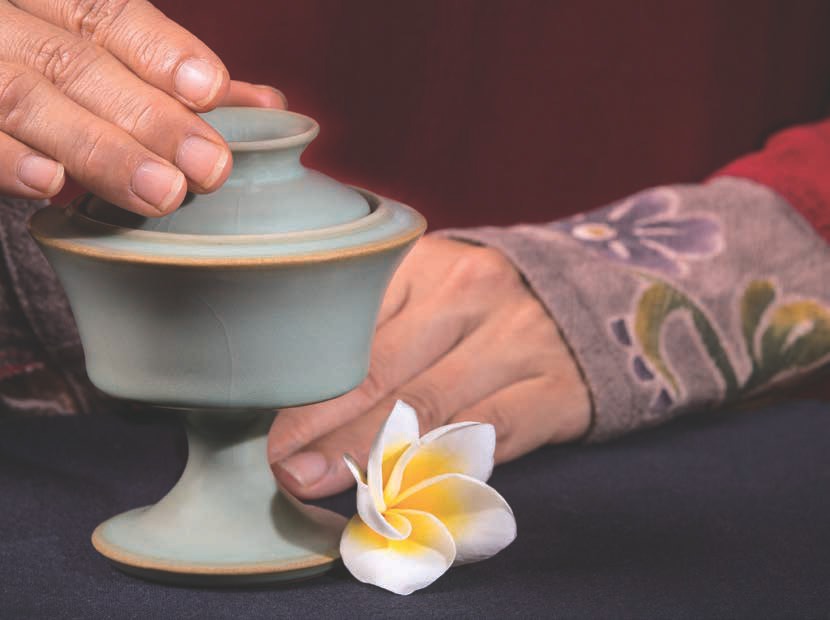 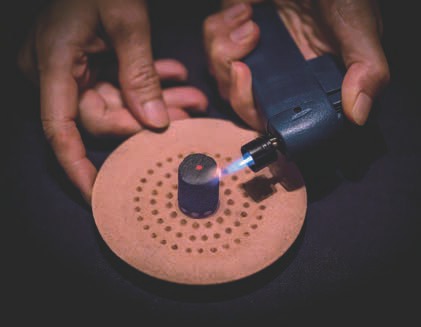 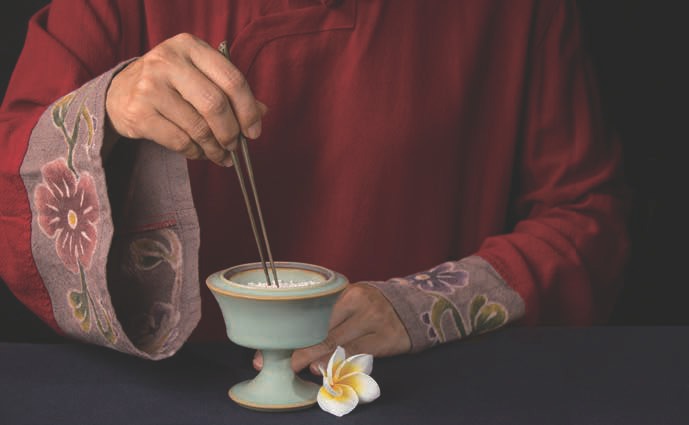 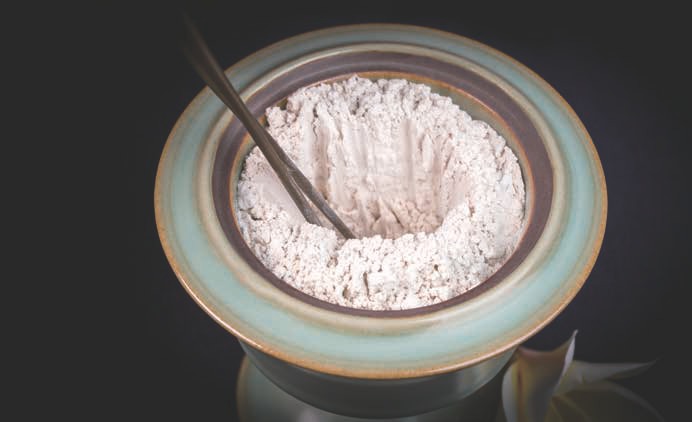 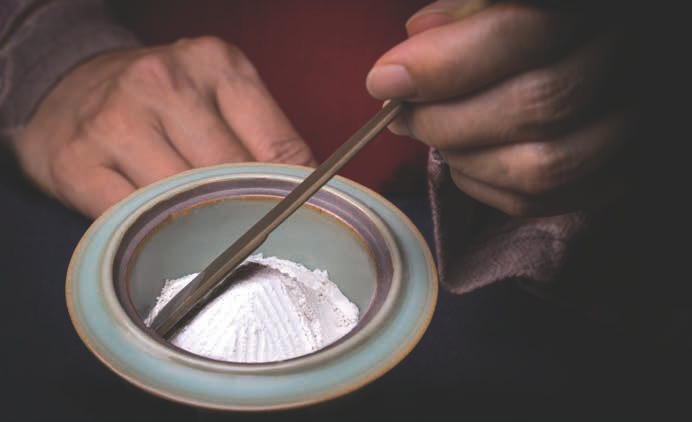 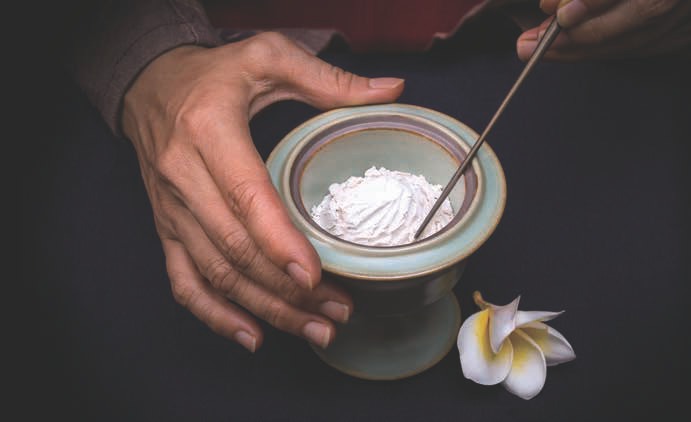 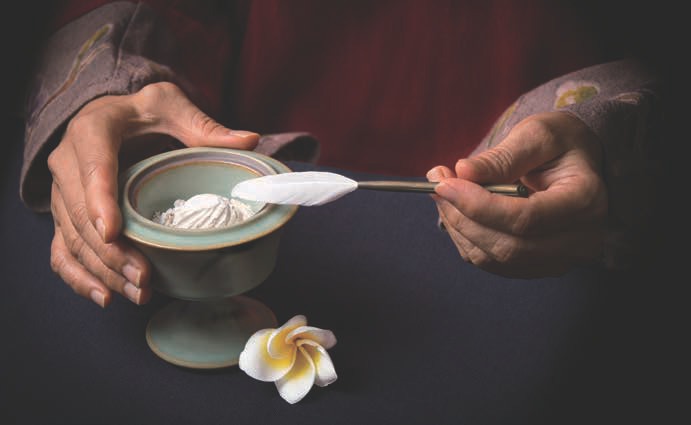 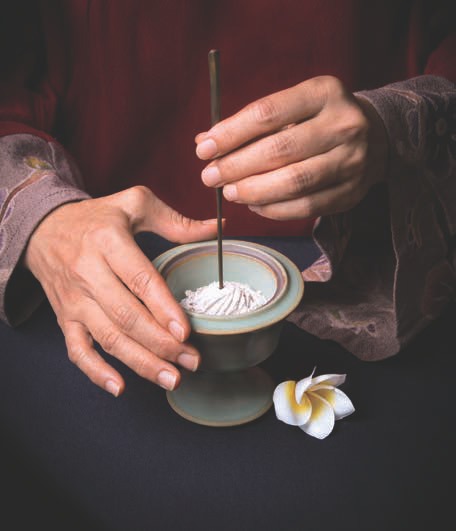 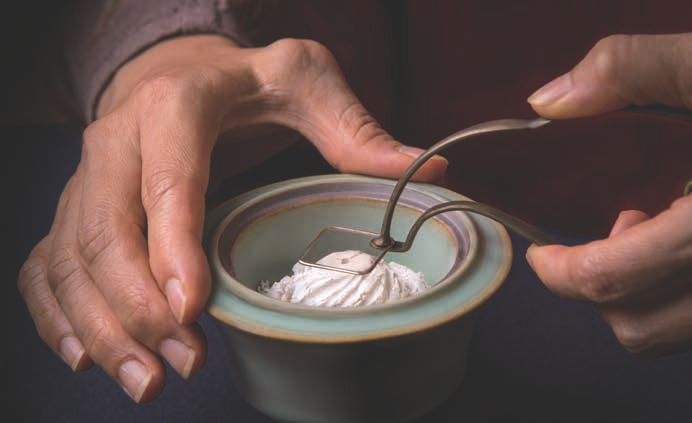 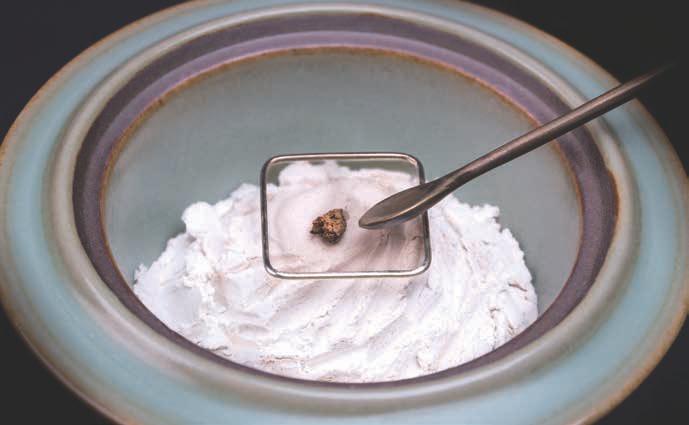 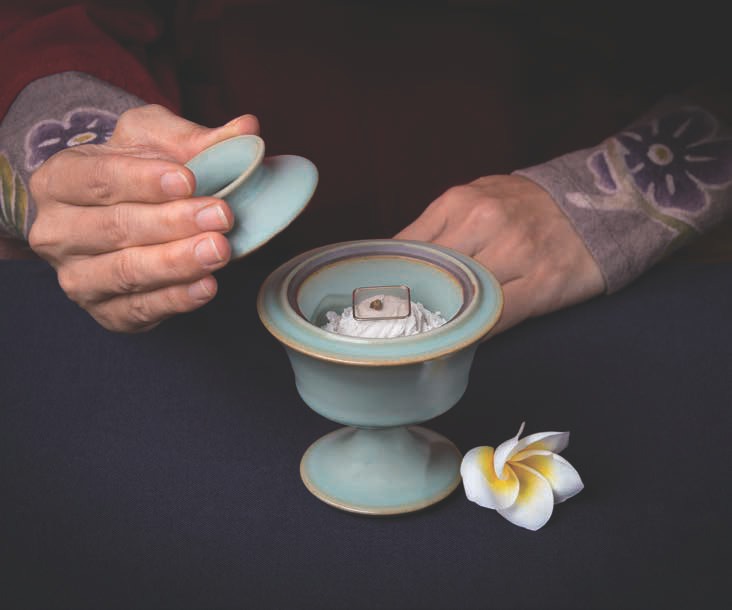 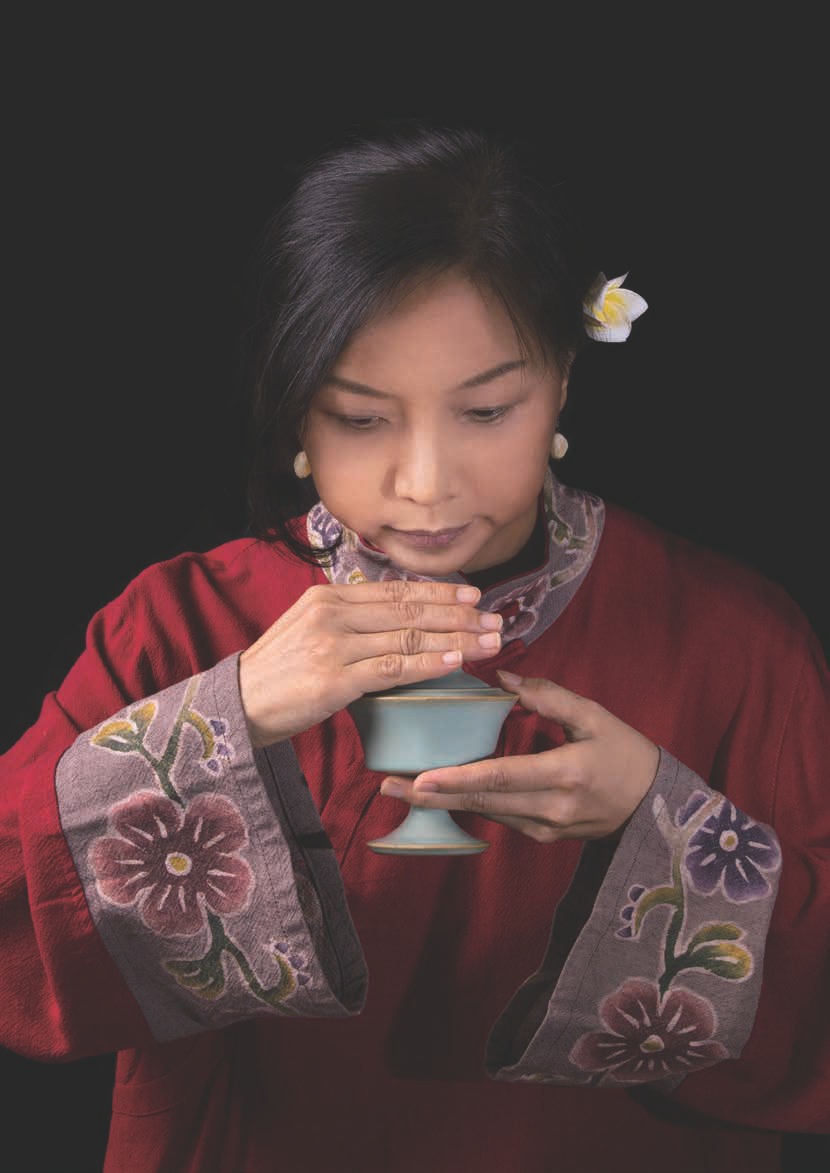 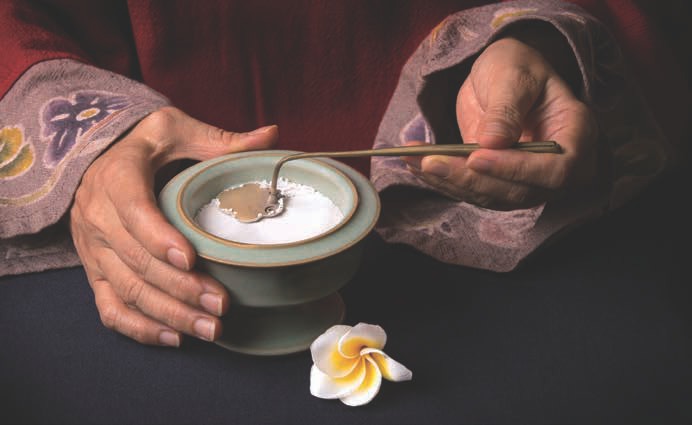 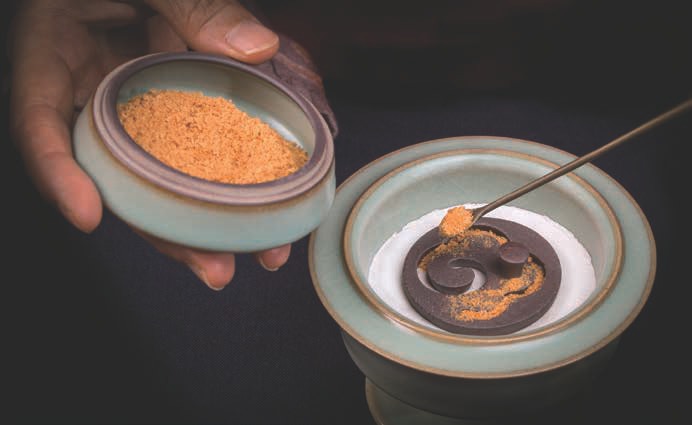 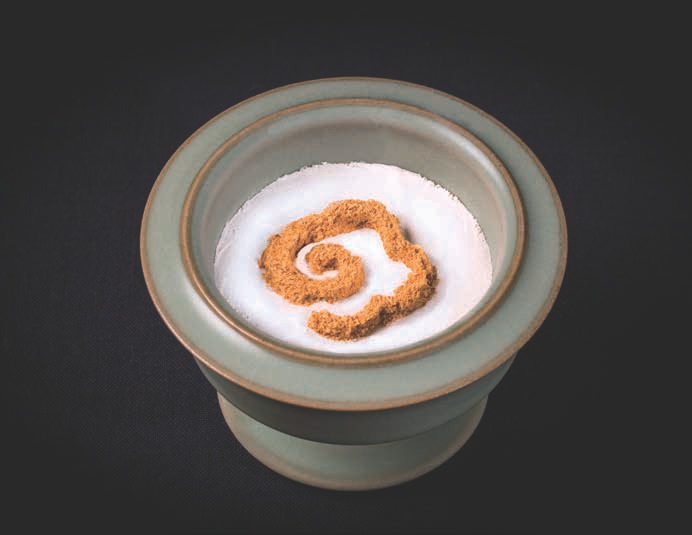