Introducing a whole new approach to our gongfu tea series: we will still be offering gongfu experiments, but we wanted to expand this section of the magazine to cover more than just the experience of those practicing gongfu tea. From now on, we will sit down at the gongfu table almost every month and learn about Yixing pots, porcelain cups, techniques, history and many other aspects of gongfu tea, improving our knowledge and practice of gongfu. This month, we begin the new series with a discussion of purple-sand clay. 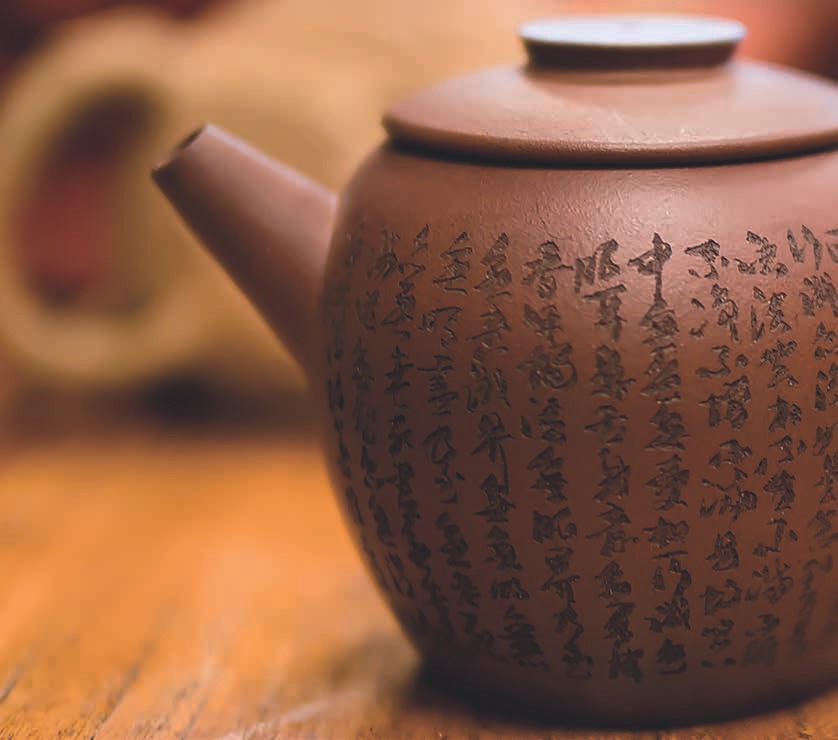 When you drive into Yixing there is a very old sign that boldly proclaims: "There is only one ceramic teapot in the world and her name is Yixing." And while there are many gorgeous clays and teaware artisans around the world, even in faraway Czech Republic, there is no clay with as deep or as long a connection to tea as Yixing. The relationship that Yixing teapots have with tea is one most tea lovers will explore at some point in their journey. Consequently, articles on Yixing history, lore, science and experience are going to play a huge role in this new "Gongfu Tea Table" section of the magazine, in which we explore all things gongfu tea.

A big part of what makes Yixing teaware so special is the clay itself. There are other aspects of Zisha tea pots we will discuss in future issues, but none as important as the clay. The Chinese had master potters long before many Western countries, having developed stoneware and porcelain many centuries earlier. The clay used in Yixing teapots is mined from the local Yellow Dragon (黃龍山), Blue-Green Dragon (青龍山) and Hu Fu (湖父镇) mountains and their surroundings. There are many ways to use the word "stoneware" in the ceramic world, but when we say that Yixing clay is "stoneware" we mean that it is made from ore mined from the Earth and crushed/fermented into clay, rather than from natural clay from a river, stream or lake. In fact, most teaware in the world is stoneware by this definition of the term. This brings the Earth element into tea brewing.

Because Yixing clay is naturally lead-free, it can be used for food and drink even after the initial firing, without the need for a glaze. Without glaze, the clay remains porous and sand-like, which means that it has a capillary action that preserves the heat of the tea liquor, especially when showered on the outside. This also means that it famously absorbs the oils of the tea and imparts them back to future brews, adding depth and wisdom as one "seasons" one's pot through use over time. Examination under a microscope allows one to see the deep chambers of pores that actually run from inside to outside in an Yixing teapot. Yixing clay is composed of quartz remains, isinglass, kaolinite, mica, hematite, iron and several other trace elements. It is fired at a temperature of around 1100 - 1800 degrees Celsius, and the quartz and isinglass remains create what potters call a "double pore structure," which ultimately was the ring that sealed its marriage to tea. The composite structure of Yixing clay makes it resilient to radical temperature changes, so that teapots can be covered with boiling water even in the cold of winter. And what could be a more elegant image than winter-plums covered in a light snow, perhaps pine-covered mountains in the distance beyond a frozen pond, as seen over the rim of a steaming Yixing pot?

After the clay is mined it looks like a block of stone, with a flaky consistency. It is then allowed to rest in the air for weeks or even years, called "corrosion," as it breaks down into small, soybean-sized pebbles. These small chunks are then ground into sand and allowed to "ferment" in water for a period. The duration depends on the ore and the master overseeing the process, though most of the old masters I've met seemed to have a "the longer the better" philosophy when it comes to airing/storing the ore. More water and sifting produce smoother clay, whereas leaving more sand creates textured clay that is often more porous when fired. Sifters of various sizes are used to create these different textures. Then, after the clay is slabbed, it is pounded with a large wooden mallet, sometimes blending colors in this way, until the putty is of the desired color and consistency. The clay itself is then fermented, and like the ore, the older the better. If a clay is very well-aged, it becomes smoother, softer and better for tea.

Many of the old recipes, blends and methods of making clay have been lost. This is one of the main reasons why antique Yixing pots make better tea, though craftsmanship and pot-making skills also haven't survived.

The variety of colors in Yixing relate to the kind of ore, where in the strata the ore was mined, how long it was allowed to "ferment" in air over time, as well as the firing temperature and, in modern times, the mixture of powders like iron, cobalt oxide, copper oxide, etc., to change the color of the clay. These additions definitely make the pot less ideal for tea brewing, even if they do enhance the appearance.

Traditionally, Yixing clay is categorized into three main families: purple (Zisha, 紫砂), red (hongni, 紅泥) and gray/green/yellow (duanni, 段 泥). Some scholars and Yixing collectors, however, suggest that the clays should be classified by what mountain they were mined from, rather than by the color. Each of these categories is a family of clay, with many kinds of ore. And each ore can then be refined to different consistencies and also fired to different temperatures. In firing, hotter temperatures will produce darker purple colors.

Yixing is famous as the "Purple-sand City" because it is the purple-sand (Zisha) which is the oldest and most common clay/ore; and that's why we capitalize its name. It was the purple-sand clay pots that became the "Father of Tea," marrying Yixing forever to tea brewing. Real purple-sand pots have a magical effect on tea liquor that can only be tasted and felt in the mouth. We suggest doing some experiments with Zisha clay versus other kinds of teaware, like porcelain, and then later continuing these experiments into a comparison of Zisha with other ores from Yixing.

The first barrier you will have to cross to do experiments with purple-sand clay and its magical effect on tea liquor is finding a pot made of real Zisha. Some tea lovers buy an "Yixing" pot on the Internet an then find that it is equal to their celadon, porcelain or other ceramic pots. It may even be worse. The issue is that the mines in Yixing were closed in the late 1990s and no more real ore is being quarried. However, when the government factories closed they had tons of ore, as well as fermenting clay, which was all distributed to employees based on seniority. This old clay is still around, but the cost of purchasing real ore or clay increases every year. As a result, potters have begun importing clay from other areas of Jiangsu or Anhui (a lot of purplish clay is brought in from a place in neighboring Anhui called Gongde). This clay from other regions is not composed of the same material as real Yixing ore, is often colored chemically and, in the end, may or may not be as nice as any other kind of clay, lacking in the magic that has married Zisha to tea for five hundred years.

Your first priority, then, is to get a genuine Yixing pot. Second, look for Zisha, as opposed to a red, hongni pot or yellowish, duanni pot. Use a trusted source if possible, learn to recognize the difference between genuine Yixing clay and other clays, and then do your comparisons. One other tip is that real Zisha clay should not be too shiny or glossy, but more matte, and you should see grains of sand in the clay, especially when magnified. The more purple these grains are, the better. As time goes on, and you see more genuine Zisha clay, you will get better at evaluating pots.

The Father of Tea

Yixing clay has almost perfect plasticity, and can be molded, thrown or cast without being sticky or difficult to work. Furthermore, it has one of the lowest shrinkage rates of any clay, on average ten to twenty-five percent from production to firing, depending on the type of clay, the processing and the temperature of the kiln. This allows for the perfect fit of the lid and pot, as well as the porous texture that makes them so perfect for brewing tea. Moreover, the quartz and other metallic elements in the clay lend it a natural, simple color. The great potter Gao Zhuang once said that what he loved most about Yixing art was that the appearance couldn't show its value, but rather its nature.

The Earth couldn't have dreamed of a clay more suitable for tea, for Yixing clay comes from deep mines, bringing that spirit and joy with it to the tea ceremony. One of the brightest masters in the Pottery City today, Ke Tao Chung, says, "The art of purple-sand teaware is used to express the feelings the craftsman has for the Earth, and then to transcend them, so that people can feel the softness and freedom revealed in the Earth." We too have found such artistic, spiritual and even elemental grandeur in holding Yixing pots - they are wise and kind, and the way they improve our tea, by absorbing its essence and power and bringing it to all our future sessions, is nothing shy of miraculous.