This month's tea is another of our favorites around here, and we all have a special relationship to it, indeed. It is actually a blend of two different plants, an old-growth Puerh and an ancient Daoist herb called "Qi Lan". Together, they dance in a magical way, filling you with old myths about the forest and the animals there.

As we mentioned last month, all Puerh comes from Yunnan, the birthplace of tea. And we also talked about how there are two kinds of Puerh, sheng and shou - remember? Sheng is the more traditional, greener kind of Puerh. It is picked, withered, fried and sun-dried. Sheng tea is then naturally fermented over time, and the older the better. It miraculously mellows from green, powerful, astringent tea to deep and dark elixirs. It also changes from "cool" to "hot", in the Chinese medical sense of the words. Shou tea means that the tea has gone through piling under thermal blankets, or more rarely in baskets, in order to artificially ferment the tea. Aboriginals in Yunnan had many ways to turn their tea warm, again in the TCM sense, including baking, roasting, or even burying it in bamboo. However, the modern method of piling the tea was developed in the 1960's and then commercialized in 1972 by big Puerh factories in an attempt to reproduce the amazing effects that time, and natural fermentation, have on Puerh tea. Of course, they only succeeded in inventing a new genre of tea, rather than actually achieving what nature does over such long periods of time.

Our tea of the month is once again a sheng tea, just like last month. Last month's tea was a unique example of sheng, though, because it did undergo some pre-production piling, which is very unusual for Puerh tea. This is not the same as the post-production, wet piling of shou tea. It is more akin to red tea, where the withering leaves are piled for 12-24 hours to increase oxidation. (Our February tea was only piled briefly, 2-4 hours, if you remember.)

This month's tea, on the other hand, is a normal sheng tea: picked, withered, fried and sun dried. It dates to the year 2004 and is from the Yiwu Mountain region.

We often drink this Puerh on its own as well. It is strong and rich, with the hints of honey and orchids that are characteristic of so many of the trees growing near Yiwu. It is also from old-growth trees, but we don't know the precise age. With the Puerh boom, much of the region has become overcommercialized and the quality of tea has decreased as a result. Generally speaking, 2004 was the last year before this major shift. Of course, there are exceptions on both sides: places/farms that had shifted towards less environmentally ethical principals pre-2004 and great, sustainable teas after 2004, like the wonderful Ai Lao we enjoyed last month. Still, there was a change in the industry around this time, as more big factories built plantations and began using pesticides, weed-killers and chemical fertilizers to meet the growing demand for Puerh tea. 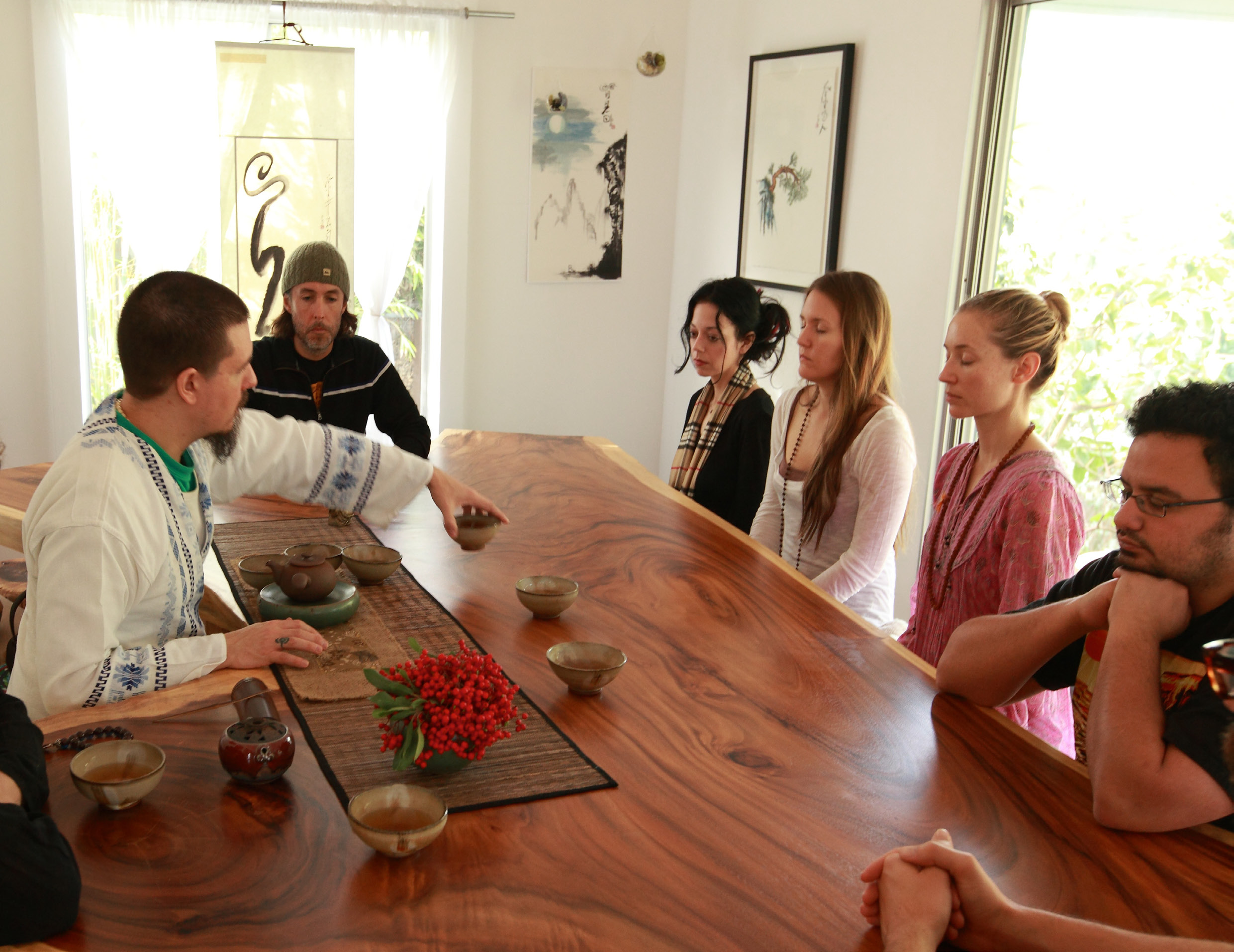 Every 5-7 years Puerh tea turns a corner in its aging process. This tea has been stored rather dryly and has therefore not turned the first corner into adolescence. It has changed, however, taking on a richer, oilier depth as the years have passed. It is syrupy and full-bodied with a powerful yang Qi.

To our tea we have added a very rare herb, and the two go together like meditation and tea. "Qi Lan" is the leaf of a rare, old-growth tree that grows in Yunnan, Szechuan and to a lesser extent Guang Zhou. Our Qi Lan comes from Szechuan and Yunnan and has been aged about 10 years to mellow it out. Not much is known about this elusive plant. It has yet to be domesticated, and we do not know its scientific classification at all. It has been treasured by Daoist recluses and Tibetan sages for thousands of years, as it uplifts and amplifies the Qi. We revel in the mystery of this magical plant. It tastes of sandalwood, and carries frequencies of Qi not to be found in any other plant we have ever interacted with. It is a Qi tonic, uplifting the spirit tremendously.

The harmony between these two plants is amazing. The Qi Lan actually turns the cool nature of the young Puerh hot. It amplifies the Qi of the Yiwu tea and also adds more of its own, altogether enough to soar through the clouds dragonbacked.

We suggest drinking this wonderful blend mid-morning, and after a nice, filling breakfast. Be sure to leave enough time/space to really enjoy it; its magic lasts a day and more. You will find yourself transported to where the poetry and myth of tea has meaning again: Spirits sway the leaves of these old plants, and tell stories of blind old shamans pushed into the river by naughty raccoons, only to find that they could see again...

* As we mentioned last month, we recommend letting the tea get over its jet lag. Let it sit a week or two and become acclimatized.
** It is good for a chajin (a person of tea) to know the difference between the terms "oxidation" and "fermentation". There is an insightful article about this for free in The Leaf magazine.