We've developed a new and exciting way to expand your tea education. If this trial run works and you find these expansions fulfilling, we plan to offer three or four of them a year. Each will come with two or more teas that expand upon the topics we are covering in that issue, allowing you to taste more, rarer and sometimes higher quality examples, in order to learn more about various genres of tea.

We have received some amazing and very positive feedback over the last few months, expressing that you really enjoy these expansion packs, as they offer the chance to learn more about particular genres of tea. As we have mentioned, finding tea that meets the budget of Global Tea Hut and can be partially or completely donated is a difficult job and there will always be so many examples of tea we won't be able to share with you, as they are too rare or expensive to share in this form. These expansion packs are an attempt to expand your understanding of tea in the best possible way: by drinking more and varied samples!

Unlike our Light Meets Life fundraiser cakes, these expansion packs are not designed to raise support for our current or future Centers, but rather to offer affordable access to teas that expand your appreciation for whatever topic we are exploring when they are offered. For that reason, these expansion packs will not be released on a schedule, but rather whenever we can find an array of the kind of tea we are sending as the Tea of the Month that helps provide something unique from the Tea of the Month, like a difference in kind or quality.

For each expansion pack we will keep our cost to around $40 and offer a flat shipping rate of $15, which makes the process easier for a very busy and over-worked Center full of volunteers. Due to packing materials and the varied cost of shipping, we will keep the minimum donation at $50. Any extra proceeds will go towards improving Global Tea Hut. The only exceptions we can foresee with regards to the consistency of this pricing would be if we decide to send some more rare or aged teas one month.

Traditionally, there are several kinds of gongfu red tea: Zheng Shan Xiao Zhong (正山小种), Qimen, Yixing red tea, zheng he (政和), bailin (白琳) and tanyang (坦洋). As we were setting out on our fourth annual Global Tea Hut trip, we realized that we would also be traveling to one of these regions (Yixing), and knew we'd have access to some very nice red tea while there. Then, days before we left, a good friend of ours in Wuyi called and asked if Wu De could travel there at the end of the trip for a few days to help out with a CCTV film and brew at a large tea gathering. Wu De immediately realized that we would then be able to offer an expansion pack of two more gongfu red teas, worried that the Zheng Shan Xiao Zhong would make this impossible, as it is one of the most expensive teas produced on Earth. 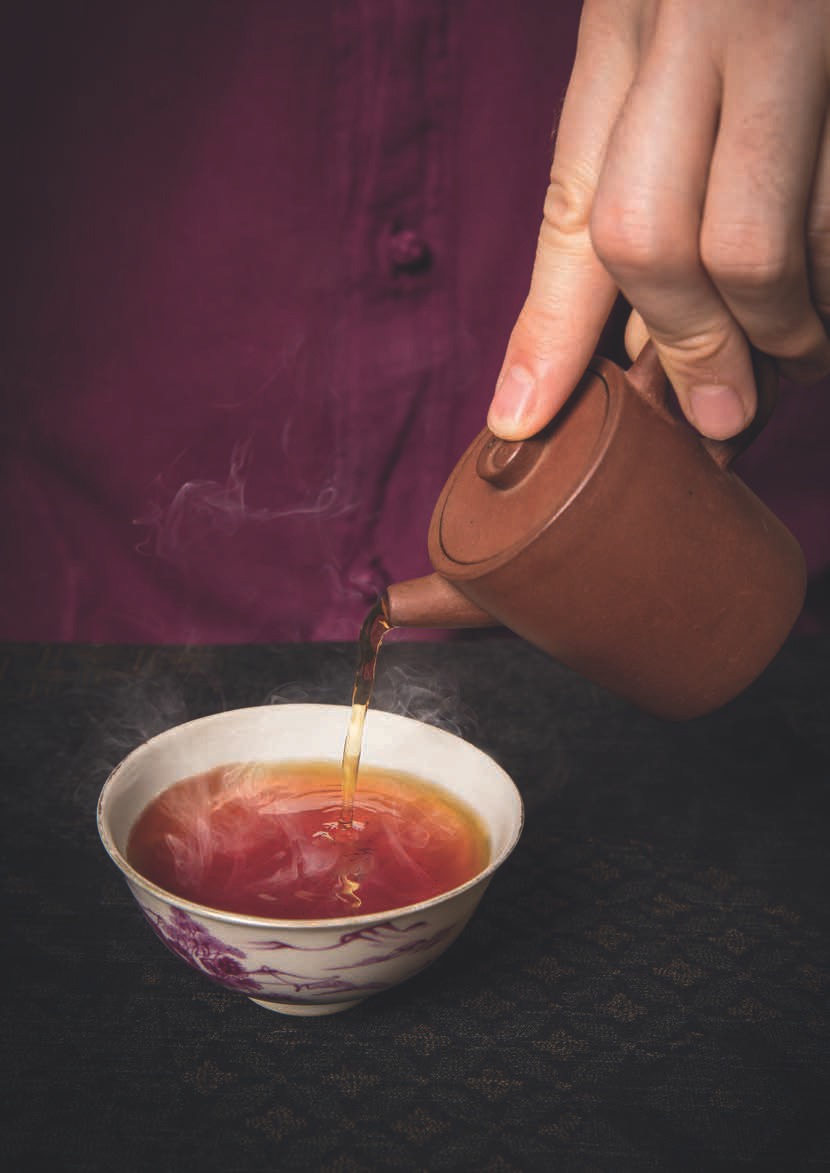 Though there is some dispute, most scholars agree that red tea production began in Wuyi. This red tea was traditionally called "Bohea" in the West, after the Minnan term for the area that sailors heard in the south of Fujian. (Actually, locals in Wuyi speak Minbei natively). This tea is often called "Lapsang Souchong," which is a mispronunciation of the Cantonese version of this tea, which is "Lishan Xiao Zhong (立山小种)" in Mandarin. (Such corruptions were common in the early days of Western trade.) "Xia Zhong" means "sub-variety" in Chinese, which is a reference to the special trees that are used in Wuyi to make this unique gongfu red tea. "Souchong" was also a certain leaf grade in Western tea classification.

In the Tea of the Month article at the beginning of this issue, we discussed one version of the traditional story for how red tea began in this area, in which passing soldiers disturbed a tea production and what was intended to be oolong over-withered. Not wanting to waste the tea, the farmers processed it anyway and discovered red tea in the process.

Most of the steps in making Zheng Shan Xiao Zhong are the same as for other kinds of red tea: it is picked, withered, rolled for a long time, piled and oxidized again and then dried. Like our Tea of the Month, Red Sun Rising, this tea also is refined and sorted more stringently, and when it is made well, there is a much greater attention to detail than with most kinds of red tea. The finest grades, like the tea in this expansion pack, are made only of thin, delicate buds, which produce a very sweet, refined and dewy liquor that can be transcendent.

The defining feature of Zheng Shan Xiao Zhong is the drying, which is done with pinewood smoke. Most tea scholars agree that this began because the houses in Tongmu Village (桐木村), the area where this tea is produced, were traditionally built alongside small roads in the mountains with little space surrounding them. For this reason, the locals learned to wither the tea in lofts above their living spaces. There are pine forests all around, so of course, these villagers would cook all their food, heat their water for drinking and bathing, and warm their homes with pine fires. The smoke from their daily lives would then drift up through the rafters to the tea that was withering in the lofts above. Tea is very sensitive to aromas, and will absorb whatever is around it. In Yunnan, camphor trees were often planted near tea trees and the tea tastes of camphor as a result. Tea leaves are also scented with flowers in the same way. As a result of this, Zheng Shan Xiao Zhong developed a smoky flavor, which was surprisingly appreciated by the market, including Western tea drinkers. After commercial production began, the tea was processed in a building called a "qing lou (青楼)," a three- or four-story building with a large fireplace for smoking.

A lot of Xiao Zhong is smoked in ovens these days, or very casually, and not made in the traditional way. The highest grades, however, are still processed by hand in the old ways. Our tea comes from an organic farm with seed-propagated trees and was completely processed by hand. Such high grades of Xiao Zhong are amongst the most expensive teas produced in the world. Only aged teas rival it. For that reason, we thought we wouldn't be able to get a nice version to share in an affordable expansion pack. Very generously, the farmer agreed to donate more than half the cost for this amazing tea so we could all get the chance to drink more gongfu red tea this month.

Red tea production probably came to Yixing from Qimen in the late nineteenth or early twentieth century. There were already many kinds of green tea produced in the area, so using bud sets to make red tea was a natural shift. Most local potters drink Yixing gongfu red tea over and over all day, rarely sampling any other tea.

Our tea offered here is from a wild, organic farm up in the hills beyond some of the other gardens and plantations. Since it is wild, it is bolder and far less delicate than most Yixing red tea, but also much more unique, offering a depth of forest that the tea you drink in local shops over teapot discussions will never have.

You can get yours on the expansion pack page of the website under the "Tea & Teaware" tab. They are limited, so you may want to check the site soon. There is also a forum for discussing each of the expansion packs, in which we will participate, making conversation more lively. We hope everyone who participates will join us with comments about the teas or questions you have after drinking them!

This month's expansion pack is: