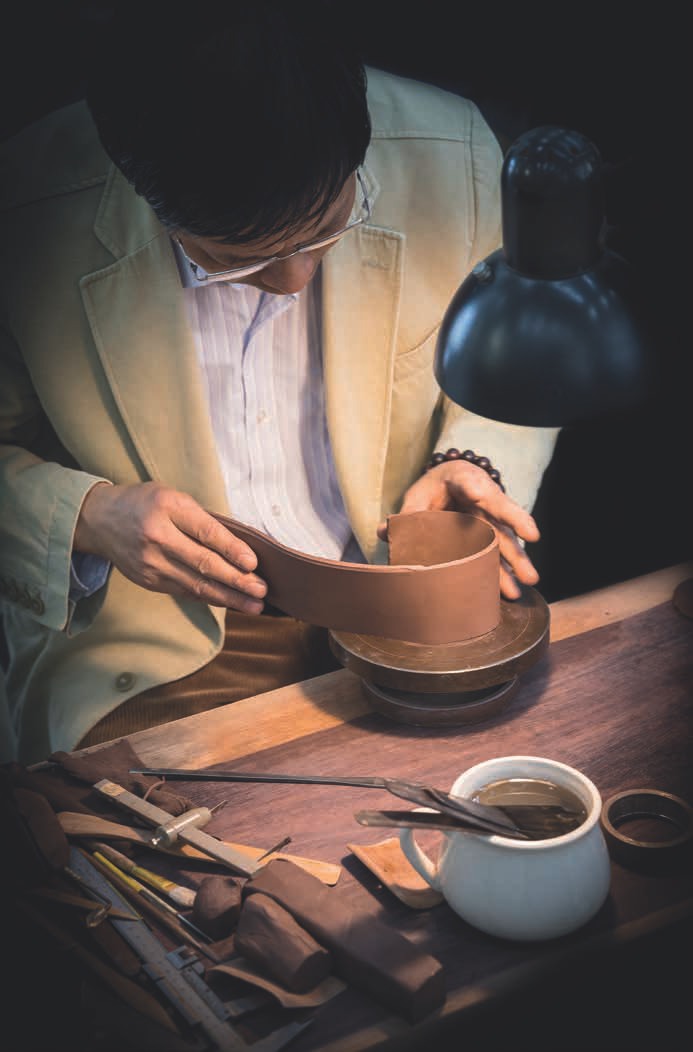 They say that an immortal was wandering the mountain currents, flying from the southern peaks of Wuyi to the distant north, when he saw a simple village full of goodness and selfless kindness. Stopping to watch, he saw that the people were altruistic and genuinely loved kindness. He decided to change their fortune for the better. He appeared the next day in the village square dressed as a traveling monk. He called out to passersby, "Free life-changing wisdom!" But no one stopped to find out what he meant, feeling content with their lives as they were. He still had a desire to offer a path that could result in their cultivation, mastery and awakening, so he tried another tact the next day, instead calling out, "Freedom and bliss!" But once again, the concepts were too vague for the simple villagers, who now began to discuss the eccentric monk and his strange cries, not knowing if he was a saint or a madman. That night, the immortal rested in deep meditation. He realized that these villagers would need a simpler, more practical and earthly path to mastery and immortality. They would need an art that would mold and craft their lives, with room for infinite refinement. He spoke with the mountains and the wind about the good people. The wind had naught to offer, busy moving the seeds for the trees. But the mountain was also grateful to the villagers, who were as kind to the earth as they were to each other. The mountain told the immortal of a precious ore buried deep within, which, once it was mined, could be used to form anything the mind could imagine, and was therefore more precious than the brightest of gems. He had found the answer, for what better gift than the freedom of creativity, endless imagination, mastery of craft and livelihood for all the generations of villagers to come. The next morning the immortal again entered the square, this time with cries of "Untold riches!" And this, of course, brought everyone in the village to the square - every house emptied. They followed the old immortal to the nearby mountain, where he had dug a hole. He went inside and came back with the gorgeous ore, explaining how to mine it and form it into clay, which could then make anything at all, bringing great fame, wealth and abundance to their village now and forever. The people were enthralled, and ready to begin right away. At that point, the immortal changed into his true form, a bright yellow dragon, and flew off to the north. From that day until now, those people and their descendants have been busy honing that precious ore into pots, and that place still bears the name "Yellow Dragon Mountain."

There is no ceramic art in the world quite like Yixing purple-sand teapots, for they aren't just pieces of art meant to sit on the shelf and be admired. The beauty of tea art is only expressed properly as a living art. The pots want to be used. They develop a soft, silky sheen over time the more they find themselves in the company of good leaves and water - becoming more and more beautiful as they are used. A big part of what makes Yixing teaware so special is the clay itself. The Chinese were master potters long before many Western countries, having developed stoneware and porcelain many centuries earlier. The clay used in Yixing teapots is mined from the local mountains. Because the clay is naturally lead-free, it can be used for food and drink even after the initial firing, without the need for a glaze. Without glaze, the clay remains porous and sand-like. 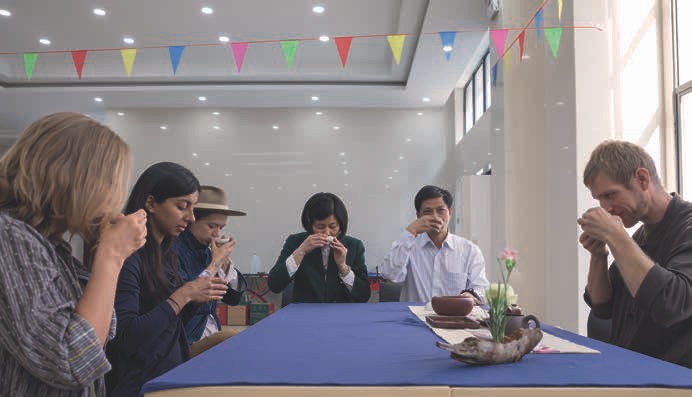 "Zisha" or "purple-sand" clay is composed of quartz remains, isinglass, kaolinite, mica, hematite, iron and several other trace elements. It is fired at a temperature of around 1000 - 1200°C, and the quartz and isinglass remains create what potters call a "double pore structure," which ultimately was the ring that sealed its marriage to Tea. Because of that, the oils in the tea are absorbed into the teapot itself and over time the pot gets "seasoned," as tea lovers say. In other words, it absorbs the fragrance and depth of all the teas it has met in its time. Also, the composite structure of Yixing clay makes it resilient to radical temperature changes, so that teapots can be covered with boiling water even in the cold of winter; and what could be a more elegant image than winter plums covered in snow, perhaps with pine-covered mountains in the distance beyond a frozen pond, as seen over the rim of a steaming Yixing pot?

We spent our two days in Yixing hosted by the amazingly talented and gracious Master Zhou Qi Kun (周其坤) and his wife, Master Chen Ju Fang (陳菊芳). They are dear old friends with a true tea spirit. They fed us delicious vegetarian food, took us around to see the old "Dragon Kiln," Yellow Dragon and Blue-Green Dragon mountains where zisha was mined from, and then to the most marvelous tea gathering of the trip. We drank a wild Yixing gongfu red tea (the same one that was in the expansion pack last month) and a 1970s Liu Bao tea donated by our dear friend Henry Yiow. Then, Master Zhou demonstrated Yixing teapot-making by hand, which was one of the highlights of the whole trip for everyone. 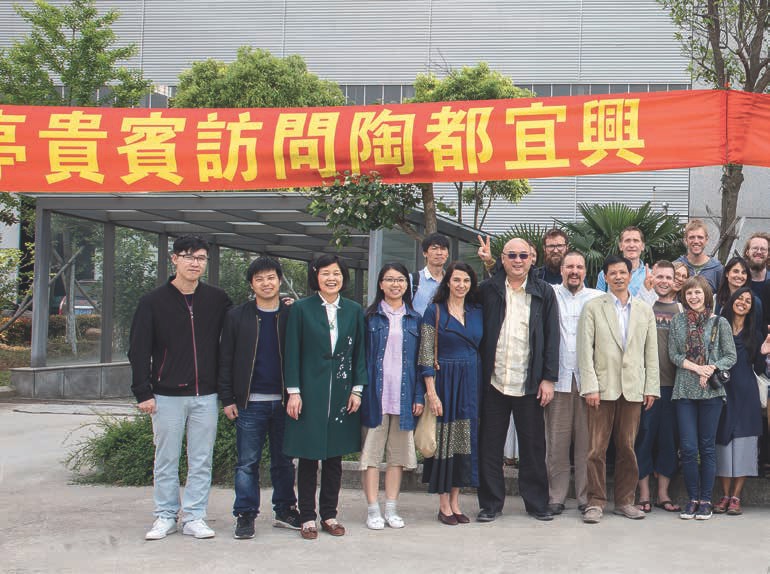 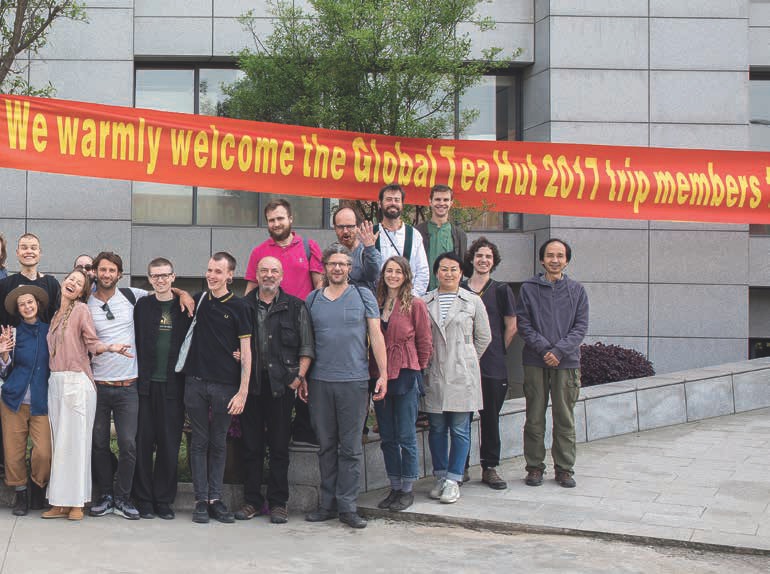 Everyone went home with a special purple-sand pot that was handmade by Masters Zhou and Chen using forty-year-old clay, and a bright dish to use as a tea boat. The teapot is a replica of a Ming Dynasty (1368 - 1644) pot that is beloved by our own Master Lin. These treasures made the trip to Yixing more than worthwhile. But the real treasure was the knowledge we had gained, which will last a lifetime.